Click a link below to see the results for a specific question or scroll through to see them all in order.

Supporting Character Deaths
Major Character Deaths
Ultimate Prediction List
What Does Sam Learn at the Citadel?
Duels & Fights
Character Returns
The Significance of Bran
Who will Arya Kill?
What Power Plays Will Happen?
Flashbacks
Who is the ‘Valonqar’?
Dothraki v. Lannister
Will Jon Snow bend the knee?
Alliances against the Night King
Is Tyrion a Targaryen?

Which of the following supporting characters will die?

Which of the following major characters will die?

Most people are convinced their favorites will NOT die! “There are so many books at the Citadel that no man can hope to read them all.” What does Sam learn as he trains in there? Which duels & fights will we be treated to? Which long lost character will return in season 7

Hodor returns as a wight We know Bran can leave damage behind with his warging. How much of the past six seasons, and Westeros history is actually Bran’s doing?

Who else will Arya kill 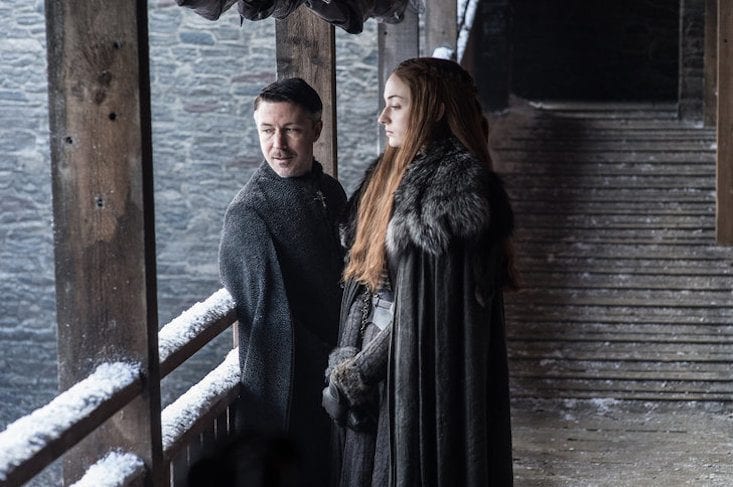 What power plays do we see in season seven?

5% Sansa marries Littlefinger and he turns her against Jon
16% Sansa turns against Jon on her own
37% Sansa presses Jon to claim the Iron Throne and make her Queen
73% Cersei aligns with Euron Greyjoy
22% Dany & Jon make a marriage alliance
8% Ellaria Sand turns on the Tyrells
Lady Olenna turns on Dorne
36% Wildings will fight the Night King, but want Tormund as King
52% Dany & Jon form a purely political alliance
20% Dany, Dorne, The Reach & The North Unite

26% An extension of the Cersei & Valonqar prophecy
19% Littlefinger & Catelyn as children
36% Varys flashback to the voice in the flames
32% Mad King burning Ned’s father and brother
38% The Tourney at Harranhal with Rhaegar Targaryen
69% Rhaegar and Lyanna’s love story
36% Battle of the Trident Baratheon v. Targaryen Cersei Lannister received a prophecy when she was a girl that she would die at the hands of the “valonqar”, the word for “little brother” in High Valyrian. If Cersei dies this season, and the prophecy holds true (as we think it has so far) who is the “valonquar”?

Neither, High Valyrian has several gender neutral interpretations, it could be anyone

Davos Seaworth says in the trailer, “If we don’t put aside our enmities and band together, we will die. And then it doesn’t matter whose skeleton sits on the Iron Throne.” How does this play out?

Jon Snow meets with Cersei & Dany both to convince them to fight the Night King, not for the throne. Dany listens, Cersei doesn’t.

The Battle between Fire & Ice doesn’t happen this season. It’s a build up to season 8 and the last thing we see is the wall falling.

We’ve seen glimpses of a Battle for Casterly Rock in the season 7 trailers. Assuming Tyrion orchestrated the attack to weaken the power of the Lannisters over the Iron Throne because it’s the source of their gold, what do we think to be true of this situation?

46%
The natural formation of Casterly Rock into the cliff allows for an extensive set of underground and secret passageways. Similar to the way Daenerys has conquered cities before, Tyrion’s knowledge of these pathways will lead them to victory.
20%
They aren’t fighting for Casterly Rock. That’s a battle in the Crownlands that will allow Daenery’s Dothraki army to advance further towards Kings Landing.
13%

The Lannisters will push back the Unsullied and settle into a siege. Danys first attempt at victory in Westeros will be unsuccessful.

tyrion says that he will use his knowledge as a former sewer master to lead them to victory, but Jaime forsees this and captures Tyrion

They aren’t fighting for Casterly Rock. Cersei sends her army against Dorne and Daenerys intervenes. Torrhen Stark relinquished his crown to become The King Who Knelt and the first Warden of the North when Aegon the Conqueror first came to Westeros with his dragons. Do we think Jon will do the same?

74%
Daenerys allows Jon Snow to remain King in the North, in exchange for his allegiance and help in claiming the Iron Throne. In return, she helps in the fight against the Night King
11%
Jon Snow will have learned the truth of his heritage by the time he meets Daenerys and bend the knee to his Aunt for the Starks to remain warden of the North
6%
Jon Snow will not kneel to anyone who conquers with fire and blood and a Dothraki horde who would lay waste to innocent women and children in their path
4%
Daenerys learns who Jon Snow is before he does and views him as a threat, and treats him accordingly One fan theory holds that Tyrion is actually the illegitimate son of Aerys “The Mad King” Targaryen, which explains why the dragons didn’t burn him alive in the Catacombs of Mereen. Do you think Tyrion is a Targaryen and/or the third head of the dragon?

37%
Tyrion is a Targaryen and Daenerys’s quote foreshadows that like Aegon and his sisters, the reconquering of Westeros by the Targaryen dynasty will be done by her and her family.
25%
Tyrion is NOT a Targaryen, but he is the third head of the dragon because they sense her trust in him
15%
Nothing. The show is so removed from the books at this point, Tyrion could be a Targaryen in the books but not the show
15%
Only one other character ever rides one of her dragons because one or more is lost in the battle between Fire and Ice
9%
Tyrion is not a Targaryen, but the third head of the dragon is a long lost Targaryen who has yet to appear in the show and has so far only been referenced in the books.

If you’re interested in our original contest, you can still submit if you want – but you can’t win!