VHS Tape repair: The Easy How-To Guide from the Experts

VHS tapes are keeping the moments from your family trips and weddings alive. They also face several risks, like crushing at the bottom of storage bins and even snapping in your VCR. Since we fix lots of damaged videotapes at EverPresent, we’re excited to show you how to repair broken VHS tapes.

Remember that your tapes are fragile and these fixes aren’t permanent. They’re just a way to get your home movies ready to digitize, or at least to preview before you decide to go digital. 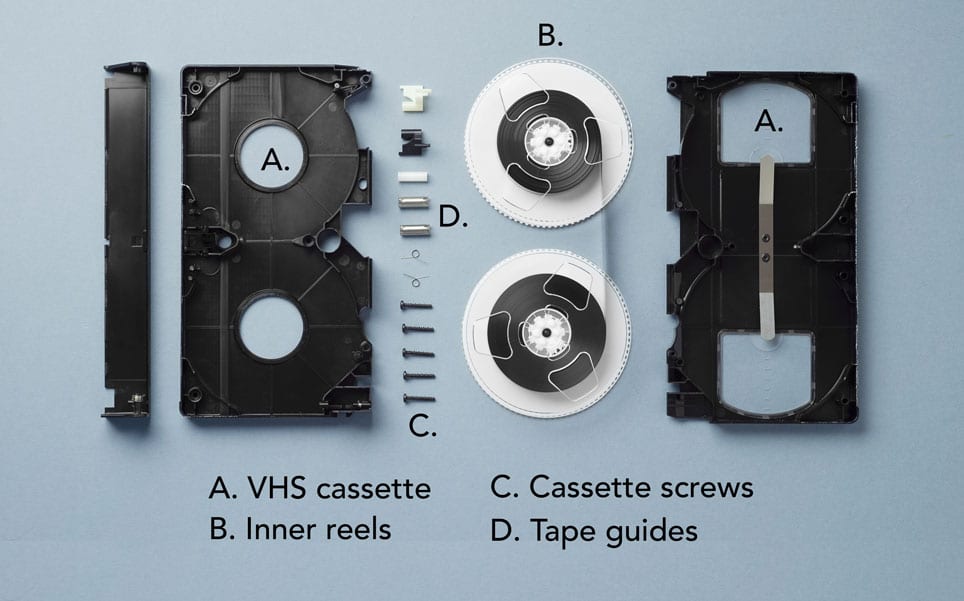 How to Repair VHS Tape That Won’t Play

While video tape damage can take several forms, most steps in the repair process are the same because the parts of a VHS tape are all the same: For tape breaks and creases (from our video): Magnetic video tape is made with a plastic base material that gets brittle with time. The tape also faces friction as it winds through cassettes and against a VCR’s tape heads. Both factors cause some tapes to snap during playback.

Tape creases happen when snapping, slackening and broken leaders cause your VHS tape to wrinkle during playback, or even while handling if the tape is hanging out of a cassette. The wrinkling causes creases in the tape that can be visible during playback. Tapes with severe creases might not play at all. Some experts can apply pressure and low heat to smooth out some minor creases, but we don’t recommend trying this approach at home as you could damage the tape even more.

Luckily, you can cut off the frayed or wrinkled tape sections caused by breaking and creasing. Then you can reconnect the watchable portions with a technique called splicing. Your VHS tapes are stored inside of brittle plastic cassettes held together with springs and screws. Sometimes the plastic breaks or the screws wear out. Not all broken cassettes merit repairs, and they might work fine if you manually pop them back into place.

The moveable flaps at the top of VHS cassettes break often. Tapes can still play without the flap, but they’re at a much higher risk of dust and other debris getting inside the cassette and affecting playback. There’s no one-size-fits-all method to identify which cracks are too severe to ignore – but if your VHS tape doesn’t play at all, a broken cassette could be the culprit.

A leader is the clear part at the end of your videotape that attaches it to a reel. If a leader breaks, the tape is no longer attached to both spools and your home videos won’t play properly in a VCR. If you made these fixes and your VHS tape still doesn’t work, it might be time to bring in a VHS tape repair service like ours. Video transfer professionals handle damaged VHS tapes all the time, so they’ll probably know how to bring yours back to life.

Still can’t get a tape to play? The problem could be your VCR and not a broken tape. Try playing a couple of different tapes – and consider finding another VCR if none of your videos play.

NOTE: You can also use the steps we covered here to repair 8mm, Beta, miniDV and VHS-C tapes. These tapes and cassettes are smaller, so you might need a smaller screwdriver and repairs could be more tedious. Some of the internal components and the number of screws may vary, and some tape formats like 8mm and miniDV are more sensitive to repairs so precise splicing is more important than for VHS. Yet all of these videotape cassettes essentially work the same way.

Having a video digitizing service provider repair your old tapes might be your best option, especially if you plan to digitize VHS tapes and other family memories anyway. We’d love to help you repair these tapes and convert them to digital, so get in touch today!

Have a VHS tape repair needed
before you digitize?