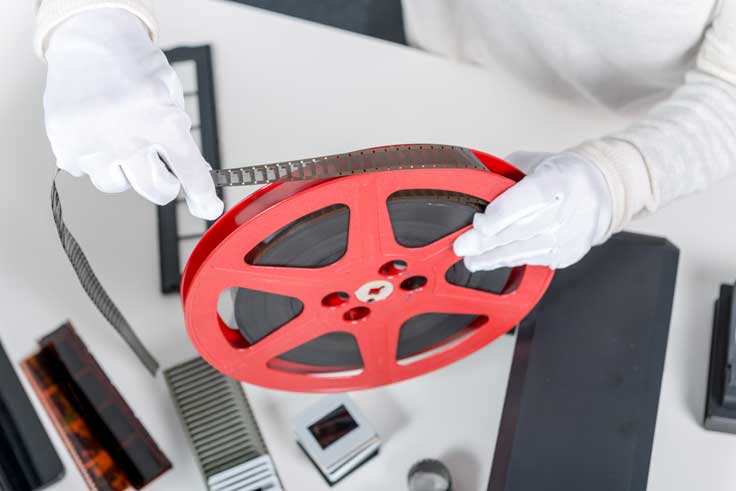 Our pricing for old film reels depends on the amount of footage on your reels. Film footage correlates directly with how much video you will get back after the transfer to digital.

Home movies come in different sizes of reels, and how many feet of film a reel holds is approximate. Fortunately, it’s not very complicated to get an idea of how much old film reel footage you have from the diameter of your reel. We want to show you how to get a better idea of the size of your film collection.

Visual learners: watch our video on measuring the diameter of film reels below! These measurements are true for 8mm, Super 8 and 16mm film reel sizes. For example, if you have three full reels, each of which is 5 inches in diameter, that’s 600 feet of film total.

Sizing for film is standardized by diameter, which can help you easily determine the footage. 16mm film reel sizes are slightly different than 8mm and Super8. You’ll usually find 16mm film on the largest reels.

Watch our 1-minute video on measuring your film

That’s all there is to it! If you have any questions about the length of your old home movies, give us a call.

Digitizing your film reels
to keep them safe

Are you converting your home movies to digital? We couldn’t agree more with your decision! We are happy to help you with your film reel size estimate and we only charge you for the exact amount of footage that contains video during our home movie to digital process.

If you’re not quite ready to digitize, it’s important to keep your old film reels safe until you want to make them digital. One of our expert technicians has some great tips for the care and preservation of old home movies.

Let us know if you have any questions,
or want to digitize your home movies with EverPresent!